A VN adaptation of a short story published prior to KimiNozo’s original release, taking place alongside the events of First Chapter.

Included as a part of 〜special FanDisk〜’s Another Episode Collection.
As usual, a rough, unedited draft translation.

Included as a part of 〜special FanDisk〜’s Another Episode Collection.
As usual, a rough, unedited draft translation. Prepared for Akane’s birthday, 2016.

In observance of Accident Anniversary Day, I’m pleased to present my latest mini-project, Kimi ga Nozomu Eien: Drama Theater vol. 2 – Hayase Mitsuki. This audio drama album details events not explored in detail in the VN or the anime, including many scenes that don’t appear anywhere else. From Hayase’s perspective, we see how she dealt with the first year after the accident, her conflicting feelings for Takayuki in tandem with unrelenting pangs of guilt, and the sacrifices necessary to draw the line. It is separated into nine chapters, and finishes with karaoke subs for Kimi ga Nozomu Eien.

Like last time, let me take this opportunity to address a couple questions:

You said you weren’t going to be doing this one. Why do you have no integrity?
You caught me. It’s true, I legitimately was mistaken about it being just a rehash of her Second Chapter route. I hadn’t listened to this one in a fair while and clearly I’m starting to lose my touch.

Does this mean you’ll be doing vol. 1 soon, as well?
Haruka’s Drama Theater album, however, is indeed an adaptation of her Second Chapter ending, and includes a ton of crucial and iconic scenes from the VN that’ve never been translated before. I’m really not keen on the idea of putting out translations for some of these lines yet before I’ve polished them to a level I’m happy with, and I think it might be best for people to experience them first in the VN. As such, my tentative answer is: “eh. prolly, idk.”

Welp, I guess that’s it. Catch you guys on the flip-side, baby.

A VN adaptation of a short story published prior to KimiNozo’s original release, taking place prior to the events of First Chapter. From Mitsuki’s perspective, a rumination on a key moment in regards to the symbolism of her hair that we don’t ever see explicitly in the VN or the anime (and indeed, Funimation dropped the ball on this detail in the dub, understandably).

Included as a part of 〜special FanDisk〜’s Another Episode Collection.
As usual, a rough, unedited draft translation. Prepared for Mitsuki’s birthday, 2016. 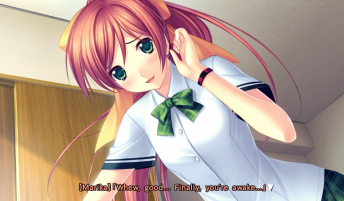 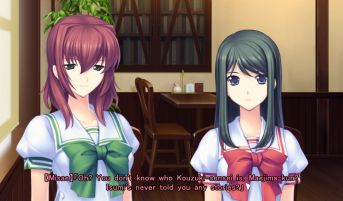 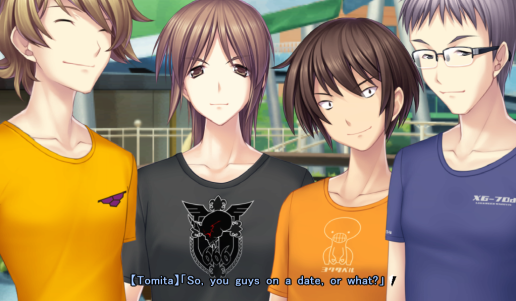 Howdy all. I recently went through and did a script analysis pass of the script for Kimi ga Ita Kisetsu 2011, and took some screenshots along the way of some KimiNozo and Muv-Luv related content to share on my Twitter. Additionally, unless you follow me on Twitter, you may have missed an old sample scene translation I did just for fun a few months back. So, because I’d like for this page to serve as an “archive” of sorts, I’ve decided to just post them here for posterity. Apologies for posting tangential content here. Maybe I’ll move them elsewhere later, but at present, this is the most fitting place I could think of to put them.

Keep in mind that a KimiIta translation is not in the works at the moment. I’d love to work on it someday, but for the time being, I’ve already got two enormous projects eating up all of my time.

While unfortunately this is all I can offer for now, that certainly doesn’t rule it out as a possibility somewhere down the line. Thanks for sticking with me, guys.

Included as a part of 〜special FanDisk〜’s Another Episode Collection.
As usual, a rough, unedited draft translation.

Doesn’t directly follow Part 1 sequentially, but is more like the “other side of the story.”
Yes, I know there is a brief pop-up. Yes, I’m a mac user.

I’m happy to present my latest mini-project, Kimi ga Nozomu Eien: Drama Theater vol. 3 – Suzumiya Akane. This is an audio drama CD that’s set in a period of the KimiNozo timeline we don’t see much of anywhere else – the first year after the accident. From Akane’s perspective, we get glimpses of her first days at Hakuryo, her budding friendship with Sakaki Chizuru, and her conflicting feelings towards Takayuki during the height of his PTSD. It is separated into eight chapters, and finishes with karaoke subs for Rumbling Hearts – Acoustic Ver.

To answer a couple of questions:

Why volume 3? Why did you skip 1, and 2? Why not 4?
The short answer is: volumes 1 and 2 are both reader’s digest rehashes of Haruka and Mitsuki Routes, respectively. Volume 3 is entirely fresh content, not found anywhere else, and contains no spoilers for Akane’s VN route whatsoever. It gives us some more insight into and justification for her three-year personality shift. I really enjoy it.

Will you do the other volumes, as well?
Not until the VN is released in some capacity, at least, for the reasons stated above. Volume 4 is just comedy content, but it’s probably better saved for later.

This was a bit more involved than my previous mini-projects, and while I realize an hour is a long time commitment, I highly recommend it to any curious KimiNozo fan looking to delve deeper into the franchise. Please do leave a comment and let me know if you like what you see, or have any thoughts to share. My entire goal with this series is to start up a dialogue about the franchise, and I’d love to hear what you have to say.

Thanks so much for your time. I hope you enjoy it.

Included as a part of 〜special FanDisk〜’s Another Episode Collection.

Only TL note I can think of is the “forest sprites of the twelve months,” which is a reference to “The Month Brothers,” a Slavic children’s book by Samuil Marshak.

The following short story was originally published in the December 2000 issue of FaNTASIENNE, under the title Pre Prologue.
It has been translated from the original Japanese. 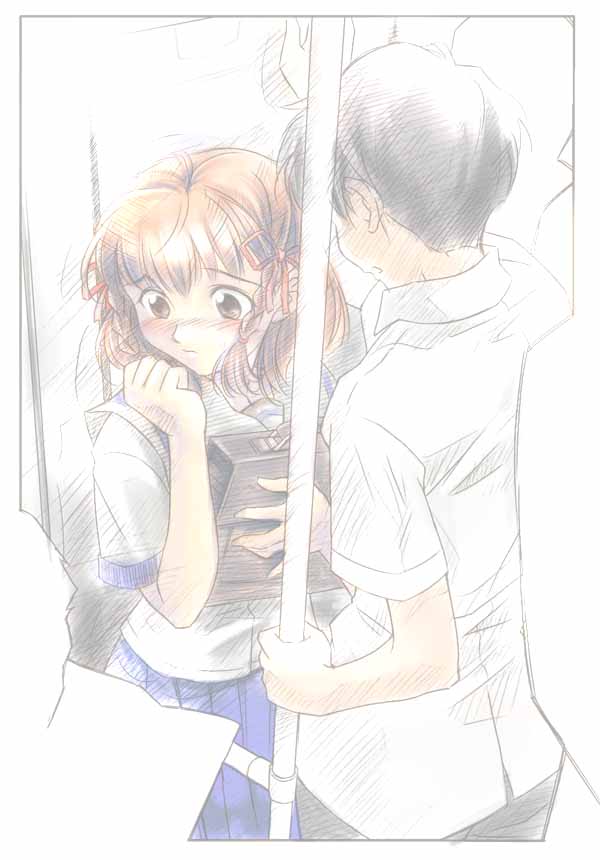 …I hate rainy days.
My uniform gets wet, my hair gets all messed up, and mud gets splashed all over my shoes…
But the absolute worst part, is that it means the trains are going to be packed.
—Ow…
I’m gonna get flattened, at this rate.
I’d really appreciate it if everyone would just stop leaning against me.
My book bag is getting crushed too, even as I clutch it to my chest.
I sure hope my textbooks are okay…
All my notebooks are probably getting crinkled up…
And my uniform’s got to be all wrinkly now, too..
And if that wasn’t bad enough, people have been stepping on my feet this entire time, so my shoes must be totally filthy by now.
The flowing scenery outside the window gradually blurs into a soft spectrum, and the train starts to rumble and shake.
Having nothing to hold on to, I hunch over a little, trying to withstand the momentum.
I squeeze my bag in tight to my chest.
But the tremors beneath my feet are making it harder and harder to keep my balance.
—Whew…
Huh?
All of a sudden, I found myself having enough space to breathe in the once-claustrophobic train car.
But… why…?
I hesitantly lift my head up to take a look.
And when I do, right there in front of me, is…
—Narumi Takayuki-kun.
I just know who he is — I’ve never actually talked to him. And I’m sure he has no idea who I am.
And yet, for some reason…
Narumi-kun has his right arm bracing against the door from his hand to his elbow, as if trying to protect me from the rest of the passengers.
We almost make eye contact, but I panic and look away.
What am I supposed to do now…?
I want to try talking to him, but I just don’t know what to say.
I’m blushing up a storm, I’m filled with an unexplainable sense of happiness, and I’ve got butterflies in my stomach…
Should I say something to him…?
As the train pulls in to the platform, an even stronger force of momentum starts to throw me off balance.
Narumi-kun grits his teeth, and braces himself to support both of our weights.
I could sense the exact moment that my heart skipped a beat.
After one last huge jolt, the doors on the opposite side of the cabin slowly opened.
Many of the passengers disembarked.
But an even greater number of people came onboard after them.
The jingle signaling our departure plays over the intercom.
With the high-pitched flute melody still ringing in my ears, the doors shut and we begin to move.
The train pulls out of the station, more crowded than before — now so cramped that I’m basically being hugged into Narumi-kun’s chest.
I can feel his steady breathing on my hair.
It feels like I can almost hear his heartbeat, even…
I start to wonder whether he can hear mine, too, and a sudden wave of embarrassment flows over me.
Uh-oh… Now I definitely can’t lift my head up.
I unconsciously squeeze my bag tightly, as if trying to suppress my embarrassment.
Any concern I could’ve spared for my textbooks and notebooks goes out the window.
Each time the rickety train jerks from one side to the other, my face gets buried in Narumi-kun’s shoulder.
It’s warm, sturdy, and I can smell the laundry detergent in his clothes.
「Ow…」
With a huge thunk, the train goes over a bump, and I can’t help but let out a little yelp of pain.
Even though all he did was accidentally step on my foot.
「Sorry, that was probably my bad…」
「Huh!? Oh…」
Astonished by his whispering in my ear, I reflexively turn up to look at him.
I knew I really shouldn’t have, but by the time I realized what I was doing, it was already too late.
「U-Um, don’t worry about it, I’m just fine, so, um, well, uh… I’m sorry…」
…I’m such an idiot.
Why the heck am I apologizing…?
He’s going to think I’m so weird…
「Well, if you say so…」
「No, it’s okay, really. It’s no big deal, I’m fine… promise.」
I slowly, ever so cautiously raise my head, only to see that Narumi-kun had turned his face away and was staring at an advertisement.
—Huh?
Is it just me, or is he blushing?
…No, that can’t be…
He probably couldn’t even hear me, that’s all.
But, just maybe… No, there’s no way.
I must be imagining things. Probably because I’m already feeling so ridiculously happy, just from having him shield me like this…

Over the train’s PA comes the announcement that we’re nearing our destination.
Just a little longer, and I’ll be set free from this stuffy, crowded train.
But, I guess that’ll also mean the end of me being here with Narumi-kun like this. And who knows if this will ever happen again.
It’s sad to think about, but it’s not like there’s anything I can do about it…
The train decelerates as it pulls in to the platform.
Outside the window, the station comes into view. I’ve basically memorized this place at this point, it being a part of my morning commute.
Finally, the train screeches slowly to a halt.
I hate the rain, and I hate crowded trains. But, just for today, I’ll promise not to complain about either…